The reason for Advanced Emissions Solutions, Inc. (NASDAQ:ADES)‘s in the last session was KPMG LLC. The clean-coal technologies developer announced that KPMG LLP has withdrawn from its role as an accounting firm with the company, which followed a drastic fall in the shares of it. In the last trading session, the stock of the company fell by as much as 46% to close at $10.60, shedding half of its value.

Get a free technical analysis of ADES.

The session marked the biggest decline in shares of the company since 2003. The filing submitted with the U.S. Securities and Exchange Commission (SEC) revealed that KPMG cited “inadequate manageemnt oversight” and inadequate accounting resources” as reason for withdrawing from its role. Further, it came to light that KPMG resigned with effect from January 23. Meanwhile, Advanced Emissions Solutions, Inc. (NASDAQ:ADES) said that it is looking for a new accountant. The company raised concerns that it might get delisted from NASDAQ in absence of an accountant. The concerns emerged amid doubts that the company could make the requisite financial filings and become compliant again.

Following the news, Cowen & Co analyst, Jeffrey Osborne revised the one-year price target on the company to $15 from $35, while assigning a hold rating. Osborne said in his note to investors that despite being a sound provider of technology solutions, the financial issues led to such rating downgrade. He said that the lack of transparency in the company’s financial statements and it accounting issues are a reason of concern. He advised investors to be on the sidelines and wait for things to get more clarity.

Meanwhile, Chairman of the Board of Directors, W. Philip Marcum expressed shock and surprise over KPMG’s resignation. He said that the company is already aggressively pursuing an accounting review to settle down the issues. 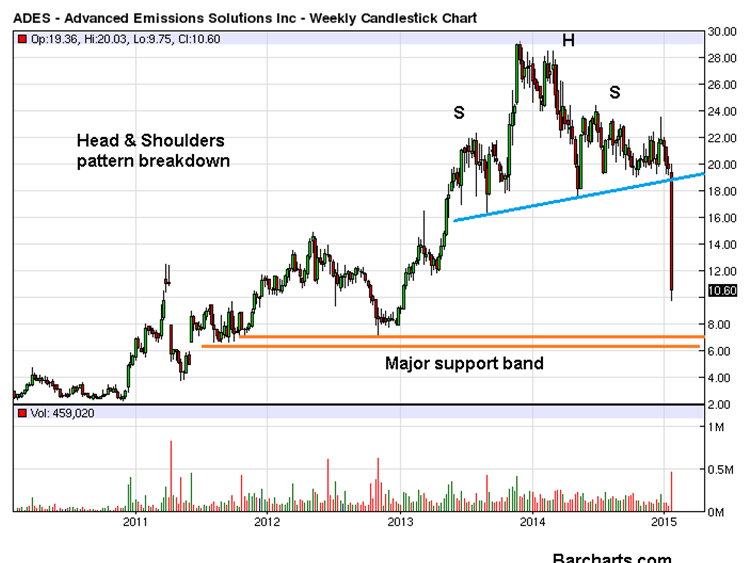 Advanced Emissions Solutions, Inc. (NASDAQ:ADES) possess a very interesting chart as it shows the same pattern playing out over the years, with the difference just in scales. The latest breakdown is shocking to most of the investors, wiping out all the gains made in 2014. It has been the consequence of a large Head and Shoulders pattern, taking shape for the last two years but one can see the same pattern & subsequent price form in 2012, although much smaller in shape. This similarity suggests that the current fall may end in the band of $6-7.