Alexza Pharmaceuticals, Inc. (NASDAQ:ALXA) has reported several updates in the recent past. One of the important information provided was the amendment of commercial ‘Manufacturing and Supply Agreement’ with Autoliv ASP Inc. for chemical heat packages. Autoliv ASP Inc. is a North-American holding company of Sweden headquartered Autoliv Inc. Also, chemical heat packages are a key composition of the company’s single-dose Staccato system.

Do not trade ALXA without reading this research report

The latest signed agreement as on December 12, 2014, will supersede some of the terms of the earlier agreement between the two companies. Firstly, the latest agreement notified that the letter of termination received by Alexza Pharmaceuticals, Inc. (NASDAQ:ALXA) in October 2012 stands null and void. Pursuant to which, the two companies have agreed to extend the agreement till 2018.

Secondly, the new agreement provides Alexza the much-needed flexibility to engage a second source supplier. Additionally, Alexza will have right to transfer manufacture line from Autoliv to itself or its licensees for supply of the chemical heat packages. Thus, Alexza Pharmaceuticals, Inc. (NASDAQ:ALXA) was able to extend its partnership with Autoliv while added clauses in the agreement make the company less dependent on Autoliv for supply of the component.

The year 2014 was exciting and rewarding to the company. For instance, the Spanish-based publication added the company’s ADASUVE to its “Best Ideas of 2014″ awards. The awards are an effort to acknowledge the contribution of persons, enterprises or institutions towards the improvement of healthcare, medicine, public health in the year 2014. It is to be noted that ADASUVE is developed to help improve the life of bipolar disorder and schizophrenia patients. The acknowledgment has given the company confidence that it will further improve the patient therapies through its Staccato technology. The functioning of the technology helps drugs to vaporize quickly so as to help delivery of alternative therapeutic options. 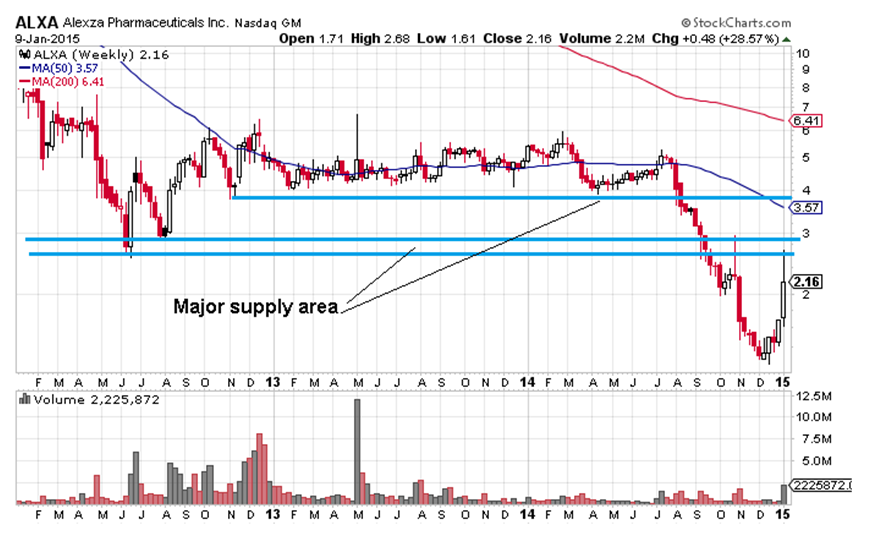 Alexza Pharmaceuticals, Inc. (NASDAQ:ALXA) has hit a very strong resistance area in the band of $2.60-$3.00 yesterday and that makes remaining bullish, despite the immense gain of 20%+, a bit tough for the investors. The nature of the last major fall in the latter months of 2014 and the way the price has been rejected from the supply zone looks really alarming and follow-through buying is a must now.