Altera Corporation (NASDAQ:ALTR) ended the session with a respectable gain of 3.17% but more importantly, it recovered more than 10% from the day low after a huge gap down opening. The gap down was obviously a kneejerk reaction to the news of the acquisition of the company by Intel Corporation (NASDAQ:INTC) breaking down. The volatility of the stock price was reflected in the volume too, as it reached a huge 37 million against the daily average of 8 million only.

Allegedly, the disagreement was over the price of the settlement. It was to be the biggest acquisition for Intel Corporation (NASDAQ:INTC), who had offered an initial bid around $50 two weeks back, a premium of about 40% on the stock price but that was rejected by Altera Corporation (NASDAQ:ALTR) for being too low. 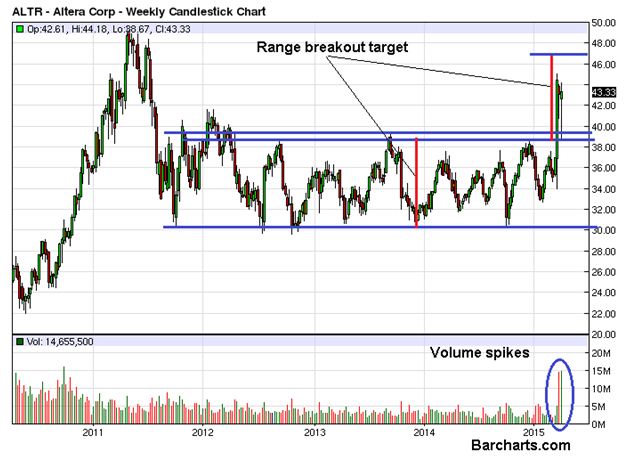 The chip-making industry is seeing a lot of mergers and acquisitions as the M&A deal value of $31 billion in 2014, the highest recorded sum since 2011, clearly shows. The deal between these two companies came as a natural step in that direction.

The weaker demand for PC has been driving Intel Corporation (NASDAQ:INTC) to go after semiconductor companies as it has decided to branch out of its conventional business and branch out in mobile technology. Altera Corporation (NASDAQ:ALTR) makes some bestselling programmable chips, an important component for servers in various data centers.

Technically, the stock has been consolidating in the range of $30-$39 for more than 3 years before the breakout above $39 took place. It was a straight rally to $45 before the anxiety over the deal was expressed in a retest of $39 levels. The volume in the last two weeks is the highest in last 3 years, showing the market interest in the stock. If it manages to stay above $39 levels for the next few sessions, it may fulfill the range target of $47.