Amarin Corporation plc (ADR) (NASDAQ:AMRN), a pharmaceutical company with its main focus on development and commercialization of therapeutics to improve cardiovascular health, presented the result of a key Vitro study that showed pretreatment with EPA resulted in better endothelial function compared to other TG lowering agents. The presentation of the result was taken as a signal to book profits as the selling pressure in the last 2 sessions was intense. The daily range of $0.5-$0.6 in the last two session were the largest in more than a year and that took place with a big jump in volume, evident from the 35 million yesterday against the average volume of 10 million only.

Have analyst identified a strong buy signal for AMRN?

The result of Amarin Corporation plc (ADR) (NASDAQ:AMRN) announced last week was taken positively by the market as the net product revenue increased by 17% in the 4th quarter from $14.1 million to $16.5 million on a quarter on quarter basis and increased by a huge 105% to $54.2 million from the earlier $26.4 million on a year on year basis. Another encouraging figure came in the form of the earnings per share of $-0.57 against the expected $-0.59. 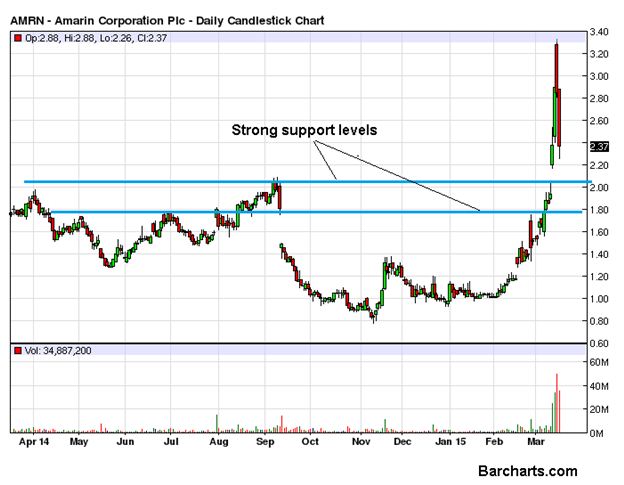 Technically, strong support can be expected from the two levels of $2.10 and then $1.80 at the lower levels. These two levels define the range that has acted as a major supply area in the past but now, following the breakout, it has turned into a demand zone. The sharp spike in the volume with the crash in price in the last two sessions implies a solid selloff and the bears may expect to continue the pressure but the key in the short term is the price action around $2.00. If reactive buyers are seen coming there, then the correction can end very fast and a bounce can’t be discarded then.