The troubles are not near the end for the Canada-based, CANADIAN OIL SANDS (OTCMKTS:COSWF). First the oil slide and now the latest climate report indicated a bleak future for this player. The recent fall in the oil prices to under $50 led the company to slash down its capital budgets and trim its payouts, but still the situation does not seem to be in hand.

Read what this analyst has to say about the fundamentals of COSWF.

No End To Trouble

All that kept CANADIAN OIL SANDS (OTCMKTS:COSWF) in an investor’s portfolio was its high dividend yield of 9.4%. But with each passing day it pops as a question as how long the company would maintain the dividend yield. The company both from the stock market perspective and operational side has done little good but worst. While the stock has nosedived by nearly 60% over the last one year, the production guidance for the year 2015 too is gloomy.

The company expects production of 95 to 110 million barrels of oil, a similar outlook as stated in early 2014, which was later revised down thrice during the year. Lower production alone is not the only negative, but higher operating costs are also a big nerving fact. The company’s operating expenses during the third quarter of 2014 was $47.73 per barrel, and it is expected to be $1.7 billion this year.

If that sounded disappointing then, there is more to it. The breaking news is that a new report from British researchers found that Canada’s oilsands should better be left underground to protect the climate change. If is obvious that the reserves in the ground are valuable to any energy company like CANADIAN OIL SANDS (OTCMKTS:COSWF), but what if it is unusable?

The researchers have concluded that three-fourth of the Canada’s oil reserves and 85% of its oilsands should not be used in order to prevent global warming. It clearly means foregoing economic growth for a country but a direct loss to an energy company. CANADIAN OIL SANDS (OTCMKTS:COSWF) shares sank by 5.53% yesterday but were up by 4.69% during after hours. 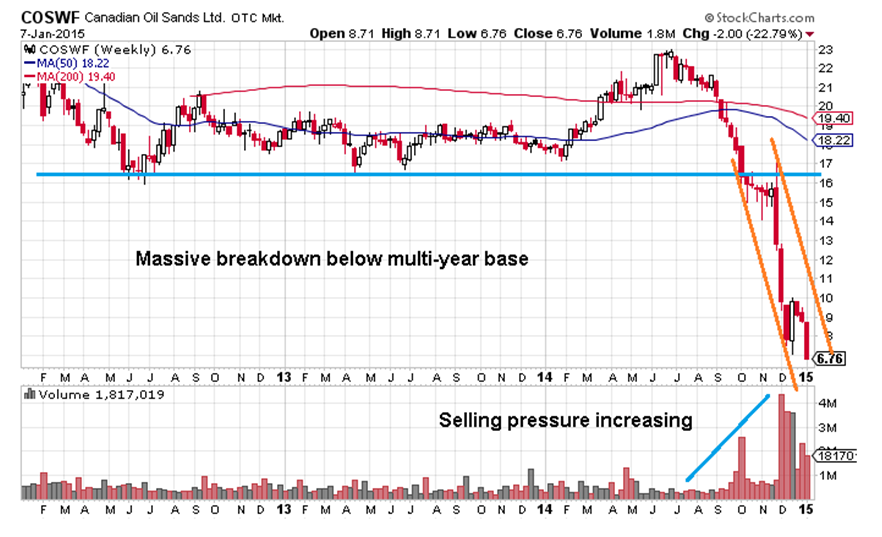 CANADIAN OIL SANDS (OTCMKTS:COSWF) has been supported by the band of $17-18 for a very long time in the period of 2011-2014. Naturally a break below this band suggested a massive selling pressure which forced the bulls to liquidate all long positions and perhaps encouraged the bears to take shorts even. The result is a massive meltdown from the $22 to sub-$7 levels in just 6 months. Only around $6 levels, the bulls can hope for some bottom fishing to emerge.