Bank of America Corp (NYSE:BAC) had an almost flat day with a loss of less than a percent, a nearly insignificant loss when considered in the context of the larger timeframe. The broader indices like S&P 500 have remained nearly flat in 2015 while the KBW Banking index has fallen by 4% only but BAC has lost over 14%. The volume at 61 million against the average volume of 86 million suggested a lack of interest from the short term traders or investors.

Where do analyst foresee upcoming resistance in BAC?

The relative weakness of Bank of America Corp (NYSE:BAC) has not stopped the analysts at Deutsche Bank AG or Goldman Sachs Inc. to keep it among the top picks. Many see the bank as unfairly undervalued, with an estimated free cash flow to equity of roughly $15.8 billion or roughly $1.5 per share or a projected huge free cash flow growth rate of 185%. The fair value of the stock is $26, according to Achilles Research. 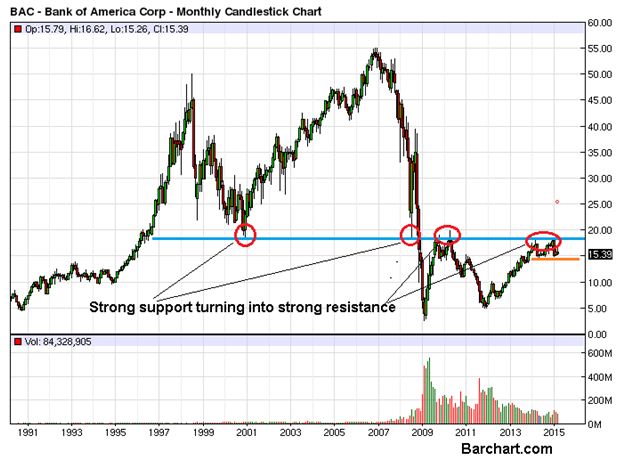 Technically, it is hard to be that much optimistic right now, particularly after looking at the long term chart. The stock had made two very important lows around $18 in 2000 and 2008 before bouncing up very sharply. In the aftermath of the global meltdown in 2008, the entire band of $18-$20 turned into a very strong supply area. The price has already faced stiff resistance from that area in 2014-15 and makes it difficult to expect higher targets.

On the other hand, the price action in the last few months has created a big contracting phase with a trendline providing support. A move below $15 will break both the congestion phase and the trendline, weakening the trend considerably. Investors should only take action after this range of $15-$20 is resolved one way or another.

Michael joined US Markets Daily in 2009 and is a national news reporter focusing on economic issues, data analysis and the financial health of state and local governments.