By Cooper
3514 Views
Posted In
Business
Tagged as
Related 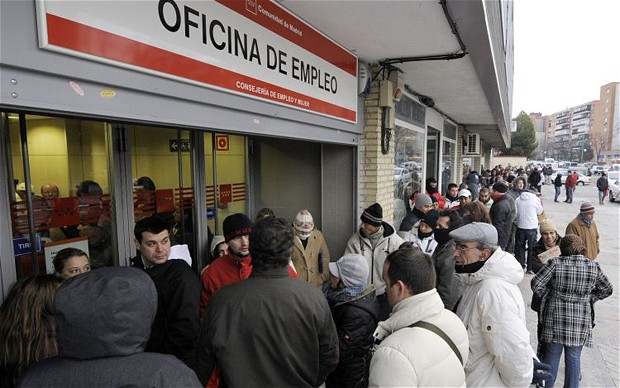 In a bizarre world of finance and economy, bad news related to economy continues to get welcomed positively by industry experts and many investors. The most recent example is the country of Spain. The government of the country announced data Tuesday, which clearly showed how the country’s economic recession is worsening, and how yet its costs of borrowing continue to be at ease.

GDP of Spain went down by 0.4% in 2nd quarter, after a shrink of 0.3% in the previous quarter. These data confirmed the reports that were released earlier in the month by Eurostat, which showed that the net economy of eurozone went down by 0.2% in 2nd quarter. Despite the discouraging economy, the country’s government managed selling €3.6 billion worth of 3 and 6 month Treasury bills Tuesday.

Investors are now eagerly waiting for a big intervention to be made by European Central Bank in the country’s bond market. This anticipation is not baseless as earlier the president of ECB, Mario Draghi, stated that the finance organization would do everything in its power for euro preservation. He also made it very clear at one of his recent conferences that the bank is more than ready to purchase government bonds of shorter terms, but only if the country’s government urges support from any of eurozone bailout funds.

In such a situation, Spain is most likely to see benefits from an intervention that ECB would make. Looking at plunging economy, suffering banking sector and growing unemployment, many investors feel that the government would be very soon needing a full-fledged bailout; something similar to what was given to other nations like Ireland, Greece and Portugal.

On the other hand the country’s government has still not taken up the option of tapping the European Financial Stability Facility, which happens to be the one and only functional bailout fund that is pending European Stability Mechanism’s approval. As per the ground rules made by Draghi, until the Spanish government does that ECB will not be able to purchase the bonds.

Surprisingly, borrowing costs of Spain have gone down greatly from the time the ECB’s president’s comments ignited hope that the bank might purchase government bonds.

The yield on the country’s two year notes went down to around 3.7% Tuesday, which is a big fall from 6.6% recorded in July. The investors seem to be blindly trusting Draghi, for his words that his bank would purchase short-term debts.

< Previous ArticleCoventry Health Care Bought by Aetna for $5.7 Billion
Next Article > Weak Session in August for Asian Markets
About the Author
Cooper