Can Stellar Biotechnologies Inc (OTCMKTS:SBOTF) Go Up From Here?

RADA Electronic Ind. Ltd. (NASDAQ:RADA) is in the business of providing radar solutions. The defense electronics contractor is based out in Netanya, Israel.

On November 28, RADA Electronic Ind. Ltd. (NASDAQ:RADA) updated on its 3Q financial results and the first nine months of 2014. The company disclosed revenue of $4.8 million in 3Q, which signaled an increase of 8% from the same quarter in 2013. RADA made a gross profit of $1.3 million for the quarter, which was up 47% over the profit earned in the like quarter in the previous year. However, it had a net loss of $202,000 in the latest quarter, which was smaller than the net loss of $576,000 a year earlier. The improvement in the bottom-line was attributed to the decrease in overall expenses even though operating expenses increased 20%.

On December 4, RADA Electronic Ind. Ltd. (NASDAQ:RADA) announced that a ministry of defense ordered a range of its radar solutions. The company did not name the ministry of defense involved in the latest order but said the defense items will help with a wide range of threat detections that include rockets, UAVs and mortars. RADA expects to fulfill the order in 2015.

According to the company’s CEO, Zvi Alon, they believe that some other leading countries will come asking for their advance radar solutions.

Shares of RADA Electronic Ind. Ltd. (NASDAQ:RADA) have edged up over 150% since the beginning of this year. No reports of stock promotion have been cited in RADA. 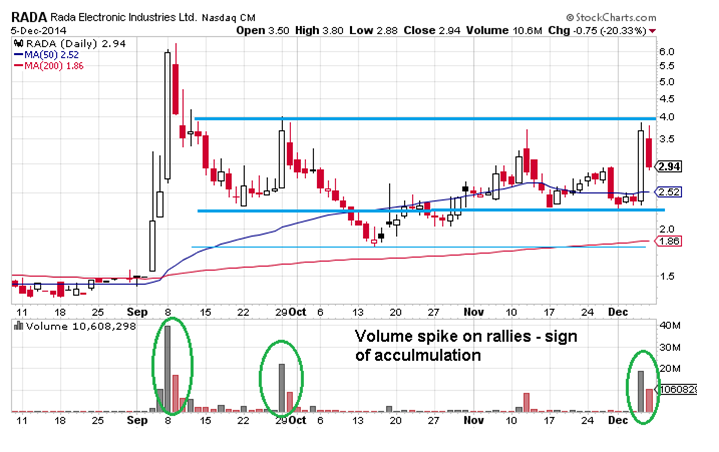