CANADIAN OIL SANDS (OTCMKTS:COSWF) perilous drop in the market continues to be a point of concern for investors as oil prices continue to hit all-time lows. Investors’ concerns have further been compounded by the fact that the company has no plans to cut its productions in the vast Northern Alberta projects.

Do analyst foresee a double-top for COSWF?

In contrast to the current market sentiments, Syncrude, and Canadian Natural Resources have announced plans to boost production in anticipation that economies of scale will result in a reduction in costs per barrel. With oil prices diving below the $45 a barrel mark, Canadian Oil and Sands could see its operating costs exceed Canadian crude prices.

Oil sand operating costs are currently at a high attributed to high energy intensity as well as the spiraling costs of labor in Canada’s North. A spokeswoman of the Canadian Oil Sands Ltd has already indicated that Syncrude will look to ramp up production amidst increasing costs rather than scale output.

CANADIAN OIL SANDS (OTCMKTS:COSWF) just like other oil sands giant remains optimistic about the future with no intentions of shutting down operations as focus shifts to generating cash from ongoing sales. A favorable exchange rate seems to have had a positive impact on the company’s returns as production costs continue to be paid in Canadian dollars while returns received in U.S dollars. 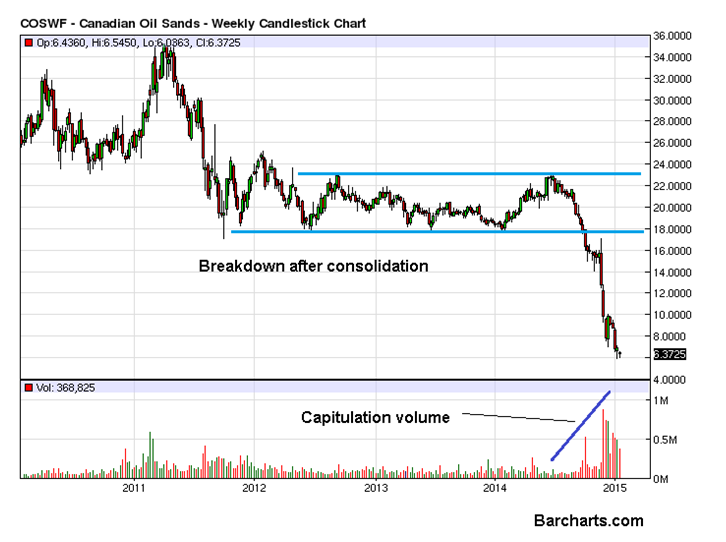 The technical picture of CANADIAN OIL SANDS (OTCMKTS:COSWF) can easily be ascertained from the long term chart, which shows not a single bit of encouraging piece of information for the bulls. The downtrend, which had started in 2012, gathered a lot more bearish momentum in the last few months, resulting in a swift journey from $23 to $6. The recent candles indicate a probable bounce to $10 but that would be the best thing expected and nothing more.