Peerless Systems Corp. (NASDAQ:PRLS) To Go Private For $7 Per Share

It is hard to talk about China at this moment without having to mention the economic slowdown in the country – the world’s fastest growing economy, they call it. China Natural Resources Inc (NASDAQ:CHNR) is based there, and most of its operations are indigenous. How does the unfavorable Chinese economic story affect the company?

Read what this analyst has to say about CHNR.

The short and clear answer is that Chinese companies must be in a panic mode because economic statistics don’t currently offer much hope. Besides, in addition to the slowdown in the domestic economy, the country is also not insulated from the global economic challenges.

In the case of China Natural Resources Inc (NASDAQ:CHNR), there are a few things that investors may need to jot down even as slowdown unfolds in Asia and elsewhere. The company is in the able hands of a CEO known as Mr. Feilie Li. He is also the chairman of the company. Going by the recent developments in the company, it is easy to see that Li is trying to keep the company from widespread economic troubles. Early this year, the CEO led the company to separate its coal business into a standalone company.

For anyone who has been following the market news for any amount of time, challenges with coal do not need introduction. However, one of the key highlights in the coal market is that the consumption of the commodity has weakened in China along with the general economic slowdown. Additionally, the Chinese aggressive green energy policies are also disturbing coal business in the country. AS such, it is easy to understand why Li decided to separate Feishang Anthracite Resources Limited.

Besides reducing exposure to a market that is facing numerous disturbances, separating Feishang Anthracite is also expected to lead to streamlined operations in China Natural Resources Inc (NASDAQ:CHNR). Such should result in lower costs and expenses that can be plowed back to grow the company or distributed to shareholders. 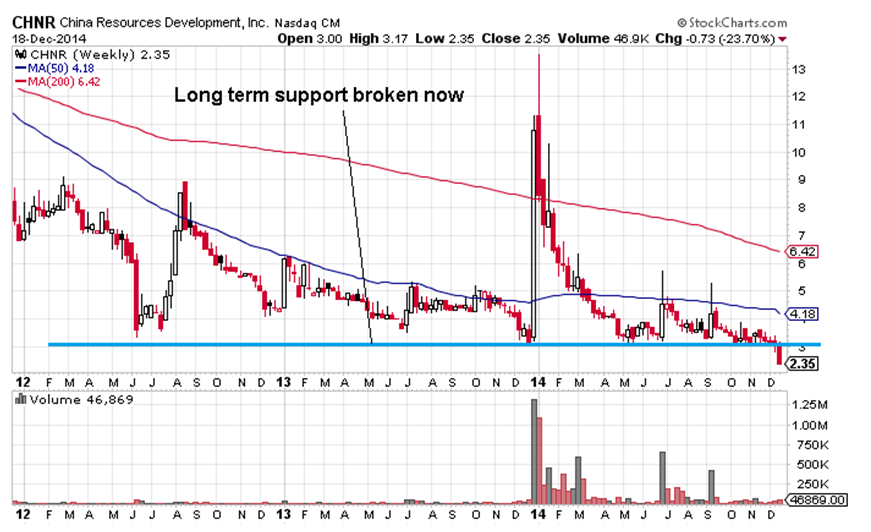 China Natural Resources Inc (NASDAQ:CHNR) found the $3 level to be acting as its perfect springboard in the last 3 years. Any technical trader would go long whenever the stock came near the area of $3.00-50 and would have successful to make a return of anywhere between 75-300%. The biggest rally originated from this very level of $3, only to be followed by a crash of the very same magnitude. Now the support is broken for the first time and the stock may not find a floor very soon.