Despite releasing positive results from small early state trials of drug, emricasan, Conatus Pharmaceuticals Inc (NASDAQ:CNAT) shares plunged by over 40% during the last trading session. The drug aims to address the liver diseases such as cirrhosis and liver impairment.

Why is momentum shifting in CNAT?  Read this analyst breakdown.

Last week, the company released the results of its studies, which included three doses to 21 patients of acute liver diseases. The data derived for the seven days did not return any adverse event or no dose-limiting toxicity, reassuring of the drug’s safety. However, the mortality rate was 50% among the patients, which according to Conatus Pharmaceuticals Inc (NASDAQ:CNAT) is a common phenomenon in patients with acute liver failure.

Further, the study aimed at testing the drug for its effect to trim biomarkers, which are main drivers of liver disease. The results indicated that emricasan showed sustained reductions in key biomarkers, a significant progress in the trial. The response was at its best in 50 milligram doses, whereas 25 milligram doses showed little but fading response. At the same time, 5 mg dose did virtually nothing in terms of its effect against placebo. Conatus Pharmaceuticals Inc (NASDAQ:CNAT) believes that the lower doses will show the impact on patients with less severe liver diseases. Meanwhile, the company is looking forward to more hard and complete data on emricasan by the year end.

The company’s CEO, Steven Mento, said that more comprehensive data by the year end will help the company to figure out its future course of direction for emricasan by seeking a rapid approval process for the drug. Cirrhosis is a condition that makes liver dysfunctional as a result of a number of assaults on the organ over a period of time. The disease affects nearly 2 million people in the United States alone. The drug, emricasan, is a ray of hope for patients who have to wait for a liver donor to undergo a liver transplant. 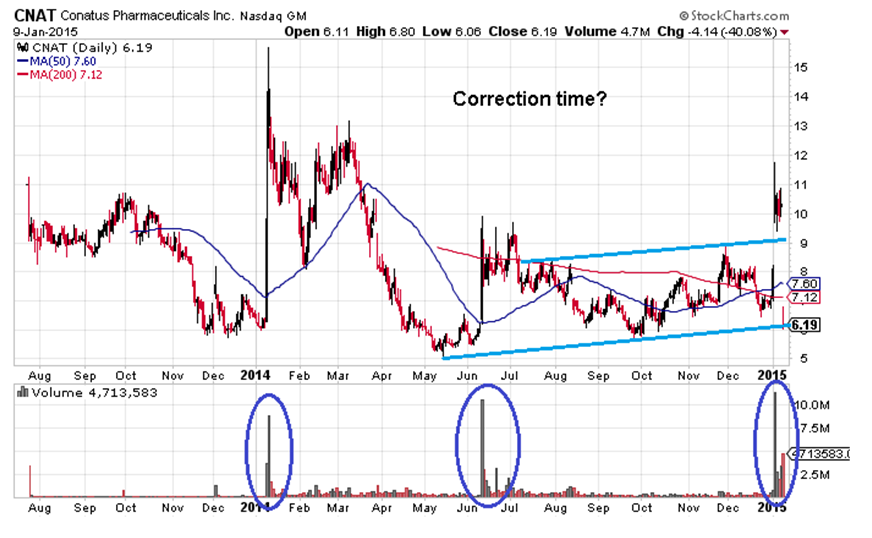 Conatus Pharmaceuticals Inc (NASDAQ:CNAT) has been trading in a sideways manner in the band of $6-$12 with occasional extensions but inside the range the cycles of volatility expanding and contracting are very clear. All the rallies come with a spike both in price and volume and then the next few weeks are spent in gradual corrections when nearly all the gains are wiped out. The current price-volume spike is very similar to the previous ones and so may be the rally is over and a correction may be expected.