Deutsche Boerse AG (OTCMKTS:DBOEY) has its eyes focused on Asia for new growth opportunities. The move abroad is majorly due to the slow growth in Europe. Deutsche Boerse has already secured clearance to establish a clearing house in Singapore.

The economic slowdown in the euro zone is hurting many sectors, including stock exchange operators such as Deutsche Boerse AG (OTCMKTS:DBOEY). The European Central Bank recently made a Quantitative Easing move to trigger growth in the region.

Learn what the indicators are telling the analyst about DBOEY.

Clearance for clearing house in Singapore

As for Deutsche Boerse AG (OTCMKTS:DBOEY), the German stock exchange company said that it has received clearance from the Monetary Authority of Singapore for its Asian focused clearing house known as Eurex Clearing Asia.

The new clearing will start begin operations in 2016, but it was originally expected to start operations this year. Eurex Clearing Asia will initially focus on certain European derivatives that trade during Asian hours and are listed on the Eurex Exchange.

Deutsche Boerse AG (OTCMKTS:DBOEY) hinted that it would be able to expand its range of products gradually after initially starting with the European benchmark derivatives. The other listed derivatives that Deutsche Boerse hopes to capture in the future include those based on Asian assets.

There are hopes among investors that Deutsche Boerse AG (OTCMKTS:DBOEY)’s incoming CEO, Carsten Kengeter, will accelerate growth abroad. Kengeter has several years working in Asia and worked with major investment banks that include Goldman Sachs. Kengeter, who speaks Chinese, will take office in June.

Shares of Deutsche Boerse AG (OTCMKTS:DBOEY) have gained nearly 6% so far this year. 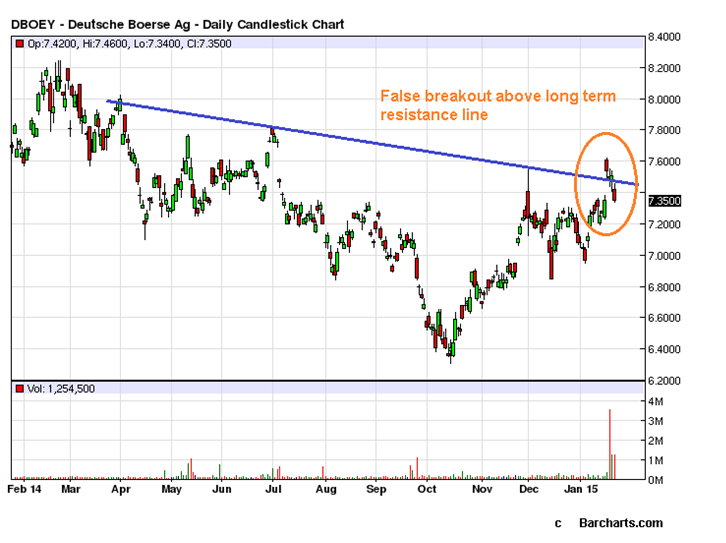 DEUTSCHE BOERSE AG (OTCMKTS:DBOEY) had registered a top near $8.20 levels in the early part of 2014 and then came the last phase of the downtrend, interrupted by occasional consolidations or sideway phases only. The first higher high came in December 2014, followed by a higher low, signaling a reversal but the rally might have ended in the short term at least. As evident from the chart, the breakout turned out to be a false one and that suggests a lot of weakness unless a new high above $7.60 is made immediately.