At less than a dollar, Emerald Oil Inc (NYSEMKT:EOX) has fallen close to 90% from its 52-week high. Alike other oil and gas companies, current low commodity price environment and bearish short to medium term outlook have negatively impacted investor sentiment. Investment analysts at Global Hunter Securities further downgraded the stock to ‘neutral’ from ‘accumulate’ rating after the company lowered its production guidance and 2015 capital expenditure plan.

Get a free technical analysis of EOX.

Emerald Oil is engaged in design, drilling and operations of oil and natural gas wells primarily in the core Williston Basin in Montana and North Dakota. The company controlled the rights to approximately 85,000 net acres of mineral leases, as of December 31, 2013. The company reported 104% YoY increase in its average daily production to 3,855 boe during 3Q14. However, average sales price (with Settled Derivatives) fell sharply during 3Q14 to $80.78 boe from $92.96 boe in 3Q13, underpinning strong production and sales performance.

The company recently accelerated the process of fitting lower operating cost rod pumps in place of electric submersible pumps to further reduce lease operating expenses. The company executed this as en masse and as a result associated downtime increased during 4Q14. Hence the company reduced its average daily production guidance to 3,300 boe from 4,300 boe announced previously.

With further fall in oil prices subsequent to the third quarter, the company expected its results to be affected during the current quarter and through the next year as well. The company recently announced that its borrowing base increased to $250 million from $200 million under the current revolving credit facility. The increase followed regular semi-annual redetermination of the borrowing base by the bank syndicate with next redetermination due on April 1, 2015. 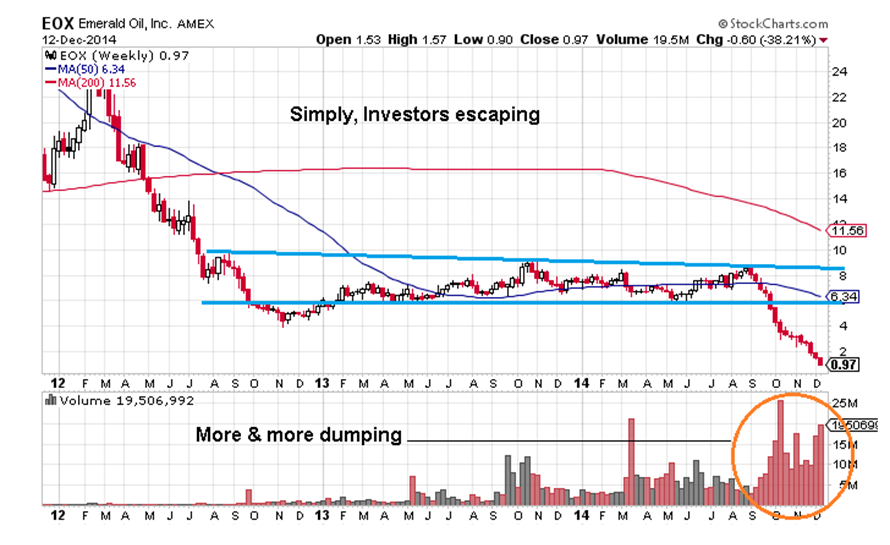 Emerald Oil Inc (NYSEMKT:EOX) is one of those stocks who are massively hurting simply for the existence of the word “oil” in their names. The bear market of oil affected the stock price badly in 2011-12 but the price had stabilized a lot in the last 2-3 years. The narrow band of $6-$9 contained all the price action in this period but a vertical breakdown of oil in the recent months brought a breakdown in the stock price too. Technically, there is no sign of reversal seen yet and any bottom fishing may turn out to be a not too prudent step.