Facebook Inc (NASDAQ:FB) has kept the community of analysts excited with the ongoing F8 annual developer conference but the market is keeping a cautious stance as evident from the small bout of profit taking this week. The announcement by the company to monetize its messenger app and opening the doors to the developers to expand it sounds interesting to most people as the importance of messaging increases every month. Introducing e-commerce and payments integrated closely with the messenger will be the next primary step of FB along with access to direct sales data to boost return on investment from various kinds of advertisements.

Have an analyst breakdown the Bollinger Bands for FB.

Facebook Inc (NASDAQ:FB) looks to be on the right track to work with and host publisher content. It can be easily expected that the company’s products and services are going to be increasingly integrated with video soon. The company looks well set to increase its share in the advertising space with multiple catalysts like Messenger Platform, Oculus, Whatsapp and not to forget the Instagram or Facebook Audience Network. 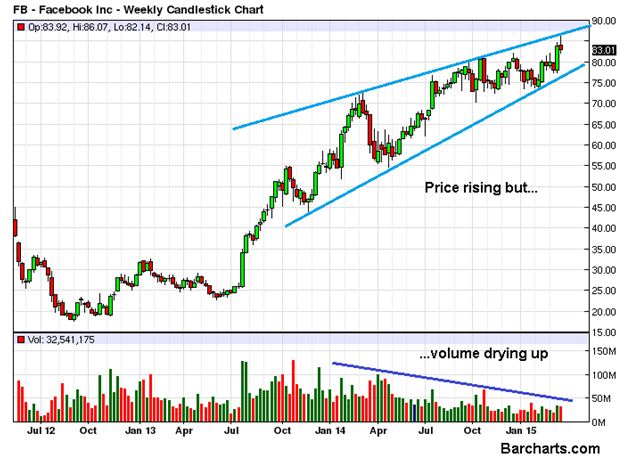 Technically, the stock has been on a bull run since mid-2013 and the rally doesn’t show any signal to reverse the trend. The strongest part of the rise ended in early 2014 though, with a faster appreciation of price from the $25 levels to $70 levels. The last 7-8 months have seen the stock consolidating in the range of $70-$80 with the breakout finally coming up last week. Still the bulls lack confidence as the post breakout price action doesn’t look very strong yet with all the gain made in 3 very small up days being wiped out by the loss in a single session.

In the short term, the bullish momentum remains intact above $82 with the possibility of testing $75-$77 levels rising only on a break below $82 levels.