ICICI Bank Ltd (ADR) (NYSE:IBN) didn’t have a good day in the market as it lost over 4%. The Asian banking sector, particularly Indian, is not enjoying the last few days and that is affecting these Asian ADRS too. IBN has come under pressure since the last week of February, when the analysts of Goldman Sachs downgraded the stock to “neutral” from the earlier “buy” rating. That invited a lot of selling pressure, resulting in the stock losing nearly 13% in the last 4 weeks and severe underperformance compared to the broader indices. In the context of the 52-weeks values, the stock is now trading exactly in the middle of the band as it is 22% off from the 52-week high of $13.24 and 24% off of the 52-week low of $8.31.

Why are analyst so optimistic about IBN?

Technically, the picture is weak and the biggest signal of the weakness emerges from the breakdown from the 3-month base. ICICI Bank Ltd (ADR) (NYSE:IBN) went up for the last few months, keeping the series of higher lows and higher highs intact. The drop yesterday marked the first intermediate lower low in the last 12 months and the implication of that can’t be understated as that changes the price character. 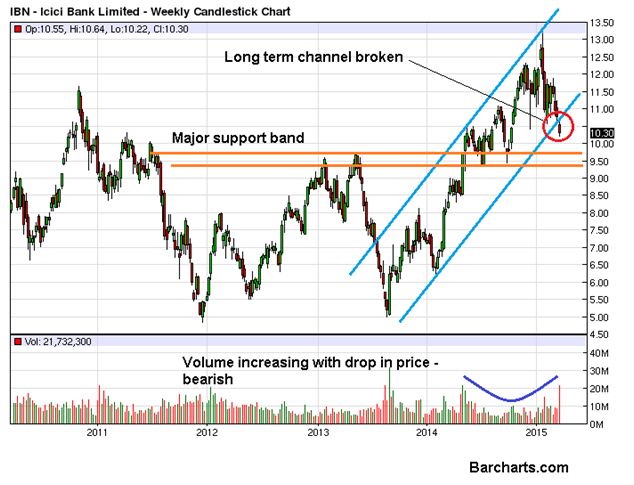 The long term channel containing the entire rally from the 2013 bottom around $5 is shown on the chart, which has broken this week. Unless a quick bounce recovers the loss and takes the stock back in the channel, a test of $9.50 levels looks inevitable. The bulls must show some strong buying support from that long term support zone around $9.50 or else the entire uptrend may get threatened.

A glance at the volume chart shows a dip in the price rallies and an increase in volume with the drops in price, suggesting a certain amount of distribution. The weakness may sustain below $11 levels for the next 2-3 weeks.