How are market trends affecting LQDT?  Find out here!

The company believes that the Wal-Mart termination may not impact its 4Q14 results. It is indeed a great concern, given the early termination of contract originally scheduled to end in May 2016.

However, the company disputes such claims and announced to contest the termination of the contract. It will seek appropriate ‘relief’ from Wal-Mart for failing to respect its rights to buy certain merchandise and related damages.

Nat Schindler, investment analyst at Bank of America Corp (NYSE:BAC), also slashed the price target for this stock to $9 from $11. He reiterated ‘underperform’ rating for the stock.

Liquidity Services, Inc. (NASDAQ:LQDT) is also contending with the potential end of its Surplus sales contract with the Defense Logistics Agency, which recently opt to extend the agreement for two months. The contract has now been extended through February 13, 2015, through which the Agency will continue to use Liquidity Services for the disposition of surplus property.

Major contracts ending in near-term could certainly pressure Liquidity Services’ earnings in the coming quarters. The company posted about 2% decrease in its consolidated annual revenue at $495.7 million for FY14 ended September 30, 2014. The company’s GMV (Gross Merchandise Volume) decreased 4% YoY to $931.6 million during FY14. Wal-Mart contributed 11% of its total GMV in FY14.

Bill Angrick, CEO of Liquidity Services, Inc. (NASDAQ:LQDT), also noted that FY14 results were lower than initial expectation because of the negative impact of changing dynamics of Department of Defense surplus contract and weakness in energy marketplace.

However, the company undertook Liquidity One transformation initiative during the period to establish strong centralized HR, IT, Financial and Legal team to better serve more than 7,600 clients worldwide. The company also launched a unified marketing, sales and operations organization to better understand its buyers and sellers.

While the company is focusing on developing innovative products and new capabilities, it would be interesting to see how it is really converting those efforts to strengthen its balance sheet. 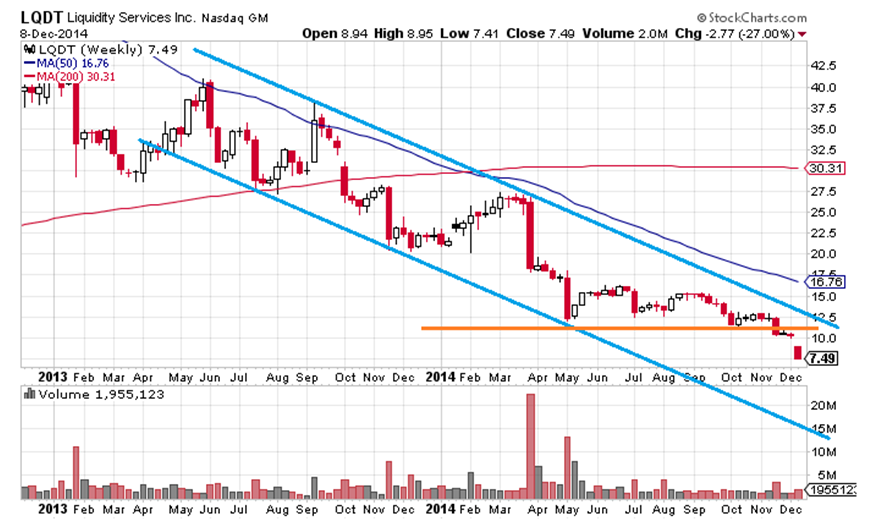 Liquidity Services, Inc. (NASDAQ:LQDT) hit the highest point at $66.57 in 2012 May followed by a bear market that is to end yet. The price action has been a typical one as usually seen in a bear market – sharp cuts in price interrupted by grinding, labored rallies. Even then, the rallies have been coming smaller for the last two years, pointing to an increase in the bearish momentum. Technically, the signal remains highly bearish and any kind of bottom-fishing is not recommended.