The humdrum in the oil-based stocks might be close to an end as oil prices continue to surge. On the back of improving oil scenario, Miller Energy Resources Inc (NYSE:MILL), an oil and natural gas exploration company, witnessed rally in its shares during the last previous session. However, traders are of view that the gains in the stock are limited as there is a forecast of another strong weekly build in the crude based U.S. stocks, as per a Reuters report.

Why are analyst so optimistic about MILL?

The optimism in oil stocks came after a hint of output cut. A data released show that there is a decline in the demand for leasing oil rig in the U.S., which signal that the producers are underway to cut down oil production. The Brent crude inched up by 1.3% to $53.64 per barrel and US oil too climbed 1,7% to $48.52. The surge in oil was supported by its Friday’s rally. As per another data, nearly 90 oil rigs in the U.S. lie idle, denoting the largest number of rigs to be inactive since the mid-1980s? As per SEB chief commodity analyst, Bjarne Schieldrop, a large number of people are waiting on the sidelines to grab a buying opportunity.

It is to be noted that both Brent and UK West Texas Intermediate crude prices nosedived by more than $100 per barrel since last summer. Hence, market analysts are surprised by the length of decrease in oil rig demand and thus, consider expectations of lowered US oil output inevitable. According to Commerzbank analysts, the foundation for a stable oil price recovery in the second half of the year has been set.

However, there has been differing opinion among analysts. For instance, Tyche Capital Advisors managing member, Tariq Zahir said that the strength in the markets is already being sold. He added that investors are considering that the oil prices have touched bottom, but it may not be the case yet. The shares of Miller Energy Resources Inc (NYSE:MILL) soared by over 27% to close at $1.49. 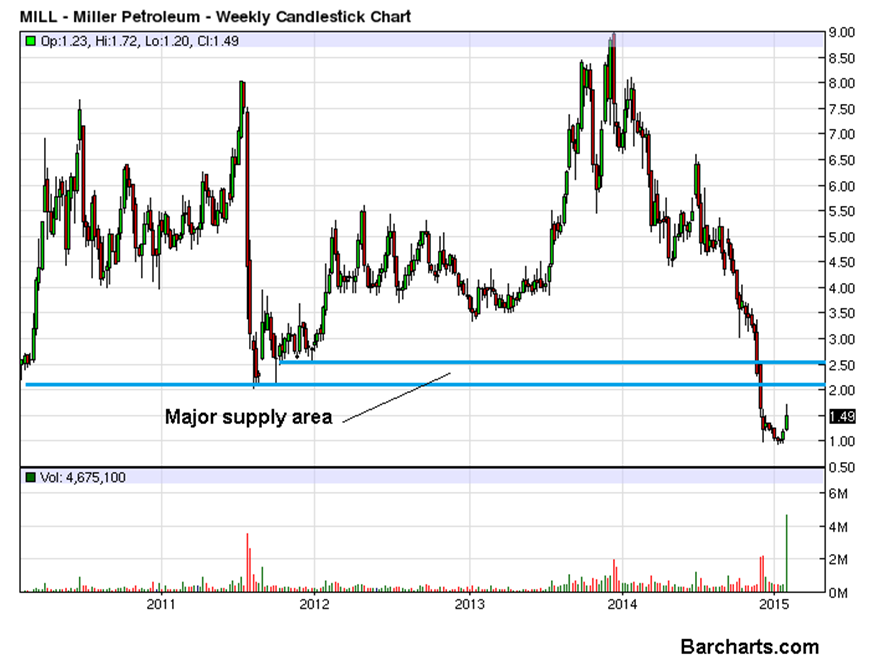 The last 5 years for Miller Energy Resources Inc (NYSE:MILL) has been marked by a sideways rangebound movement inside a huge band of $2-$8 with occasional outlier movements. The structural weakness on the long term chart is clearly visible from the speed of the drops compared to the rallies, much faster. The last major downmove began early 2014 from the high of $9 and the final low around $1 has been reached in about 12 months. The bear market doesn’t look to be over yet and any rally may be thwarted by the supply pressure from $2.00-50 levels.

Michael joined US Markets Daily in 2009 and is a national news reporter focusing on economic issues, data analysis and the financial health of state and local governments.