Following a week of huge gains, thinly traded nano-cap stock Genetic Technologies Limited (ADR) (NASDAQ:GENE) has tumbled again. The shares of the company shed 22.71% in the last trading session, which followed a further slide of 2.15% during the pre-market hours? The stock values at $2.73 currently. There has been no update or news pertaining to the company that could cause such downfall in the shares.

Will GENE continue on its latest trend?  Get the free report!

The company announced last week that six breast cancer diagnosis or treatment centres would start offering BREVAGenplus, a move indicating positive future prospects for the company. The announcement by the company had propelled its shares higher by over 183% on the day. However, the rally in the micro-cap stock appears to be fading. The company had said that at least six new breast cancer treatment centers will begin offering the company’s predictive test to patients. The new centers are expected to launch by March while the company anticipates the number of centers to increase going forward.

Optimistic about the development, Genetic Technologies Limited (ADR) (NASDAQ:GENE) accredited the development to its revised sales strategy. The company said that it would focus more on large and comprehensive breast care centers as well as imaging points. The idea is to tap into higher potential in these centers, which have long sales cycle though. The company said that it expected lower volatility in test volumes on the backdrop of the shift in its sales strategy.

An applauding reaction to Genetic Technologies Limited (ADR) (NASDAQ:GENE)’s announcement was normal given the increasing number of breast cancer cases emerging in the United states. It is to noted that every 1 in 8 women is exposed to the threat of invasive breast cancer. At the same time, nearly 85% of the breast cancer patients do not have any family background of breast cancer, which accentuates the significance of companies engaged in serving this field of medicine. 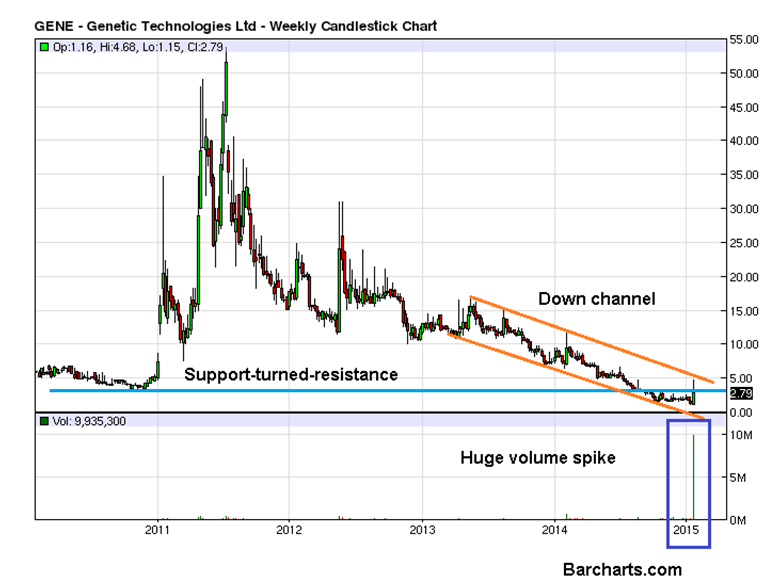 2011 was both the best and worst year for Genetic Technologies Limited (ADR) (NASDAQ:GENE) as it experienced an amazing rally to $50 levels from the lows of $5 and subsequently dropped to $15 before the year ended. The bear market is not finished yet with every demand zone turning into strong supply area every month. The channel that contains the downmove for the last few months show the first major resistance at $5 now and despite the latest spike in both price and volume, the resistance may survive for now.

< Previous ArticleWill LiveDeal Inc (NASDAQ:LIVE) Be Able To Live Up To The Expectations?
Next Article > Is Miller Energy Resources Inc (NYSE:MILL) Ready For The Good Times?
About the Author
John Eisler