What Does This Move Tell You About Key Energy Services, Inc. (NYSE:KEG)?

Atossa Genetics Inc (NASDAQ:ATOS): This Stock May Be Undervalued

The mention of oil and gas quickly bring to the memory the falling oil prices and an oversupply in the market. Mid-Con Energy Partners LP (NASDAQ:MCEP) is particularly a prominent name in the oil and gas industry. Given its track record, investors might be interested to know what lies down the road.

Have analyst identified a ongoing trend in MCEP?

First and foremost, it is hard to talk about any oil company or partnership for this matter without touching the fallout of oil prices. It was always expected that oil prices would go down amid the U.S. shale boom. However, the fall has been steeper than anticipated. The price has declined over 40% since June this year. According to analysts, the price could continue to respond to gravity over the next several months, up to 12 months in some cases.

As oil prices continue to fall, analysts have been seen adjusting the views on Mid-Con Energy Partners LP (NASDAQ:MCEP), but not much to raise an alarm. According to Zacks, there have been earnings actions on the MCEP and the track record is mixed by most measures. Over the last 30 days, for instance, the stock received one positive earnings estimate revision, which was offset by another one negative revision. Nonetheless, Zacks Consensus Estimate seemed to indicate that there was solid trading down the road for the partnership.

The reason there appears to be hope around Mid-Con Energy Partners LP (NASDAQ:MCEP) is that the company recently made inspiring moves. First of all, a significant amount of the company’s production is currently hedged for the next at least two quarters. However, the current hedged production appears to have reduced because it is quoted at 60% yet the company previously had nearly 80% of its output hedged. Still, 60% is not a bad position considering the prevailing price environment. Hedging helps oil companies to cushion against sudden price fluctuations.

Another important development in Mid-Con Energy Partners LP (NASDAQ:MCEP) worth mentioning is the October acquisition of wells and acreage in the Permian Basin. The company said that the acquisition had the potential of boosting its distributable cash. 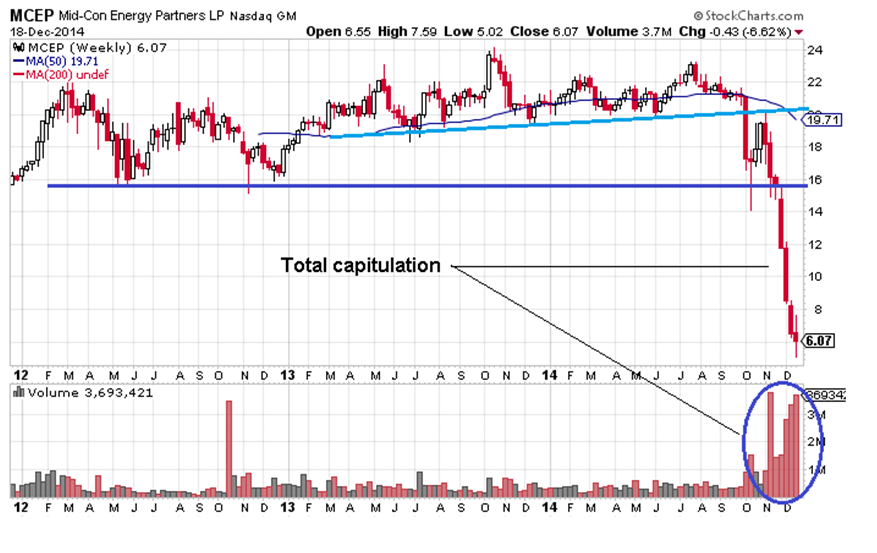 Mid-Con Energy Partners LP (NASDAQ:MCEP) has found support from $16 levels time and again in the last 2-3 years but faced supply pressure from the band of $22-$24 more in that period. In 2013-14, the bulls had managed to create higher lows and higher highs in an attempt to expand the band upward but finally the months of October 2014 saw a sharp crack, resulting in a vertical drop from $21 to $6 levels. The volume has spiked with the crash in price, showing huge capitulation.