There is no relief to the equipment rental company, Neff Corp (NYSE:NEFF) for its exposure to oil and gas sector. The plunge in the oil prices is showing its affect on Neff as well, the shares of which, nosedived by more than 7% to close at $7.39 in the last trading session. The company has been covered by a number of analysts and research firms lately.

What buy signals should you be looking for when trading NEFF?

The latest verdict on the company comes from Bank of America, which has revised its rating on the company from Neutral to Underperform. Other than the Bank of America, Piper Jaffray too had initiated coverage on Neff Corp (NYSE:NEFF) last month, assigning an Overweight rating and price target of $19. In its research report, Piper Jaffray analyst, George Tong, said that the company’s differentiated focus on earthmoving equipment together with its leading position in the Sun Belt region is remarkable. Tong added that these factors are powerful enough to help accelerate the company amid the broader equipment rental industry. Neff Corp (NYSE:NEFF) shares plunged by over 15% post its IPO and hence, Tong see a room for the company’s shares to recover and move up.

Similarly, Morgan Stanley too started its coverage on the company last December. The research firm gave and Equal weight rating and $19 price target in its coverage. Analyst, Nicole DeBlase, said that though the price target reflects 52% upside on the current share price, but they want to remain on sidelines for the coming period due to the impact from plunging oil prices. DeBlase noted that Neff Corp (NYSE:NEFF)’s exposure to the tune of 52% in non-residential construction in the U.S. is attention-seeking. However, 23% exposure in oil and gas concerns too. Further, the cash flow profile of Neff appeared quite weak when compared to the peers.

DeBlase concluded that the outlook on the company may change if Neff strives to generate free cash-flow supported by strong execution and high net leverage in the future. 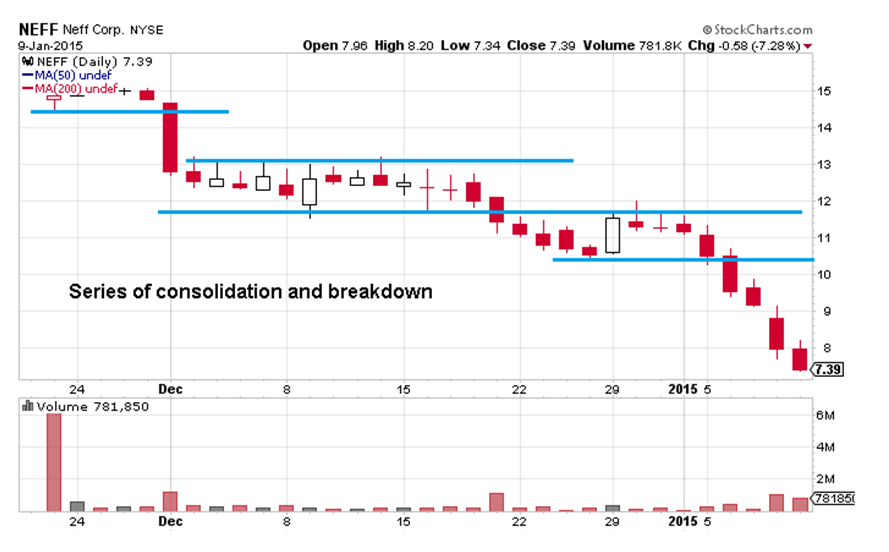 Neff Corp (NYSE:NEFF) is a fresher in the world of stocks as it has been trading only for 2-3 weeks but the down trend is clearly visible and well established. The pattern consists of a few sessions being spent in a consolidation phase and then a breakdown to a lower level before the next sideways phase. Now the fall is gathering momentum as the price has not entered into any rangebound state in the last few sessions.

Barry is a senior journalist at Us Markets Daily. He reports, shoots and edits many of his own stories by himself.