As the Greece’s new government shut the door on Eldorado Gold Corp (USA) (NYSE:EGO)‘s mining project, the shares of the latter tanked by over 14% to settle at $4.78. A Reuters report said that Greece’s new government strongly opposes to the idea of setting up a planned gold mine in the country by Eldorado. The project is among the biggest foreign investment projects in Greece.

What does the Relative Strength Indicator (RSI) say about future trends with EGO?

Strongly Opposed To The Project

Energy minister, Panagiotis Lafazanis, told Reuters that they are scrapping the plans to sell their state natural gas utility. Also, the government will not allow the Canada based Eldorado Gold Corp (USA) (NYSE:EGO) to set up a gold mine in the area. Lafazanis reiterated that the government is committed working towards fulfilling the promises made during the election campaign. The Syriza party recently elected to power has promised to act on issues that have led to financial market collapse.

Meanwhile, Eldorado Gold Corp (USA) (NYSE:EGO)’s Skouries gold mine in northern Greece represents the flagship project of the previous government’s initiative to drive foreign investment. The project was regarded as a test case to establish the fact that as to what extent Greece government could protect foreign investors amid local opposition. Though Lagazanis has not made clear if, they will prevent the project to operate ahead but said that they are against it and will examine their next steps.

The comments of Lafazanis pushed the shares of Eldorado Gold Corp (USA) (NYSE:EGO) to a six-year low, which holds 95% of its Greek venture. In response to Greece’s statement, the company’s vice president, Krista Muhr said that the business will go on as usual. She said that the company holds all the requisite permits and is legally eligible to carry on its operations and development as usual. She further added that the company would have not kept putting money in Greece if there were any doubt about it. Eldorado Gold Corp (USA) (NYSE:EGO) investment plans in Skouries has had its own share of a rough history, where controversy and local protests over the years have hampered the company’s activity. 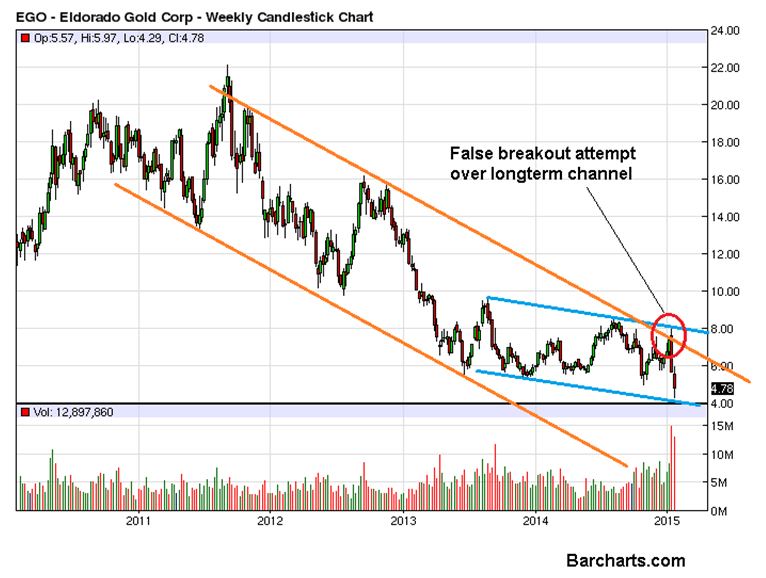 Eldorado Gold Corp (USA) (NYSE:EGO) registered its top around $22 in 2011 just before entering the bear market that would take it to $4 levels in the next 3 years. The bear market has been punctuated by occasional sharp counter trend rallies but the major trending move has always been contained in a perfect channel for the last few years. In the last few weeks, we just saw the bulls failing to make a sustainable rally above that channel, which clearly pointed to to the bear market continuation for a long time yet.