Petroleo Brasileiro Petrobras SA (ADR) (NYSE:PBR) had a strong session with a gain of 8.96% with a volume of 80 million, nearly twice the daily average volume of 44 million. The market is excited about a potential deal between Royal Dutch Shell plc (ADR) (NYSE:RDS.A) and BG Group plc (ADR) (OTCMKTS:BRGYY). If this deal materializes, then Shell will pay $70 billion for a UK based company Reading in a stock & cash deal, enabling Shell to be more competitive in Brazilian deepwater crude oil projects. This deal is expected to change the entire oil industry environment in Brazil and Petroleo Brasileiro Petrobras SA (ADR) (NYSE:PBR) may well turn out to be one of the chief beneficiaries.

Have technical analyst identified a strong wedge in PBR?

The entry of Shell in Brazilian pre-salt mainstream implies financial leverage and the capability to make fresh investments. In that case, if Petroleo Brasileiro Petrobras SA (ADR) (NYSE:PBR) offloads its minority holdings in pre-salts altogether, then the company can raise billions of dollars after that proposed deal. 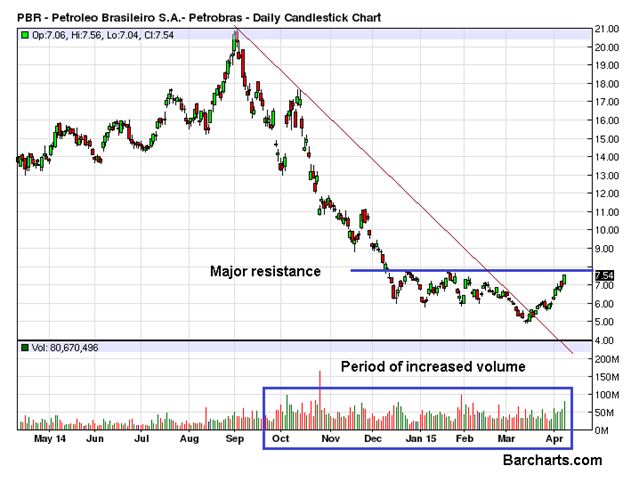 Shortage of cash for project development and poor governance standards has pushed back the asset valuation of Petroleo Brasileiro Petrobras SA (ADR) (NYSE:PBR), resulting in a credit rating drop to “junk” by Moody’s Corporation Investors Services in February and now Fitch Ratings threaten to do the same if the company fails to complete offshore production fast enough to increase output.

Technically, the stock doesn’t look very healthy from a long term perspective as it has been trading in the price band of $5-$10 for the last 5 months, last seen about a decade back in 2006-07. The level of $10 was multiyear support before it was broken in the last part of 2014. Now the band of $10-$11 can be expected to push down any rally but on an immediate basis, a correction can be expected from the area around $8.