Pfizer Inc. (NYSE:PFE), ended the session with a modest gain of 1.17% yesterday, a continuation of the long term uptrend. The stock is nearly 15% up on a year-to-date basis and has outperformed the broader market by a good margin. Despite the revenue coming down for the company for the last few years, the stock has only rallied. The reason for that could be the 10 drugs the company has in phase 3 trials, which if approved, could open up a worldwide market and turn out to be blockbusters. The company wants to capture a large part of the $20 billion market for biosimilars.

What buy signals should you be looking for when trading PFE?

It is hard to find any real point of strength of Pfizer Inc. (NYSE:PFE) from the fundamental point of view in the last 3-4 years but the technical state of the stock is excellent as evident from the chart attached. The long term chart shows the decade long major bear market of 1999-2009, dragging the stock from $50 levels to sub-$15 levels but since 2009, the stock managed to recover a lot. It has already retraced more than 60% of the entire loss in just 5-6 years and if it manages to sustain above the major supply area around $39, then retesting the life high wouldn’t look very unlikely. 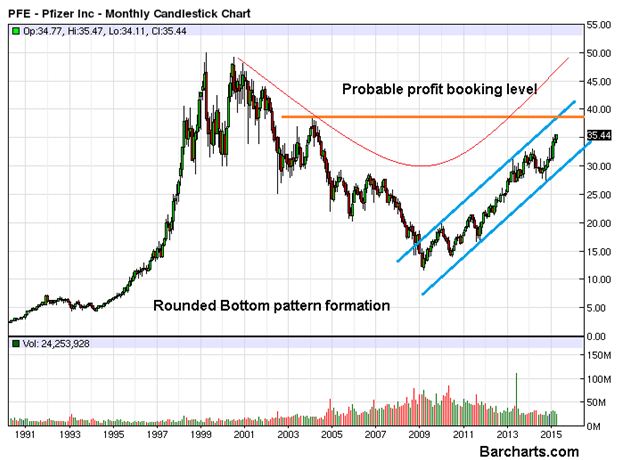 The entire rally from the 2009 bottom is perfectly channelized but the internal divisions of the rally show an impulsive nature. However, if the current rally, labeled as 5th major wave using Elliott Wave Theory, doesn’t turn out to be extended, then a correction to $30 or slightly lower is possible before the next phase of the long term upmove emerges.

The chart attached also shows an extremely large Rounded Bottom pattern formation, which gives a target of $39 and then $48-$50 in the next 1 year or so. Technically, the safest buy area turns out to be $28-$30.

< Previous ArticleAlcatel Lucent SA (ADR) (NYSE:ALU) – Cautiously Bullish Above The Support Of $3.60-70
Next Article > Onglyza By AstraZeneca plc (ADR)(NYSE:AZN) Could Be Death Promoter
About the Author
Scott Sally