There is no question that investors want to see PhotoMedex Inc (NASDAQ:PHMD) doing more to create value for them. However, the question remains about whether the company is doing enough to make shareholders happy. In the latest move, fundraising has been among the top priority issues that the management of the company is handling.

Analyst have identified a trend in PHMD.  Get the free report!

Such fundraiser projects are important for the company because they help it to enhance its cash position in a less expensive manner.

At a time when shares of PhotoMedex Inc (NASDAQ:PHMD) are down more than 90% since the beginning of 2014, insiders have also been moving to reduce their exposure to the company. On December 15, the company’s President and CFO, Dennis M. Mcgrath, offloaded 55,000 shares at an average price of $1.14 a share. The transaction fetched $62,700 in proceeds and left the CFO with 265,136 shares in the company.

PhotoMedex Inc (NASDAQ:PHMD)’s performance in the most recent quarter was not impressive as the numbers fell short of the consensus estimates. The company generated revenue of $53.70 million in the latest quarter, falling short of the estimate of $60.75 million. However, the revenue figure was better than $52.12 million in the previous quarter. Additionally, revenue increased 17% over the same quarter last year.

Coming to the bottom-line, PhotoMedex Inc (NASDAQ:PHMD) printed red by posting a loss of $0.27 per share yet analysts expected a loss of $0.23 per share for the quarter.

The company’s financial position also weakened significantly in the latest quarter compared with the previous one. Perhaps that underscores the need for fundraising in the company. In the most recent quarter, PhotoMedex disclosed cash and equivalents of $15.87 million yet it had $36.66 million in the previous quarter. 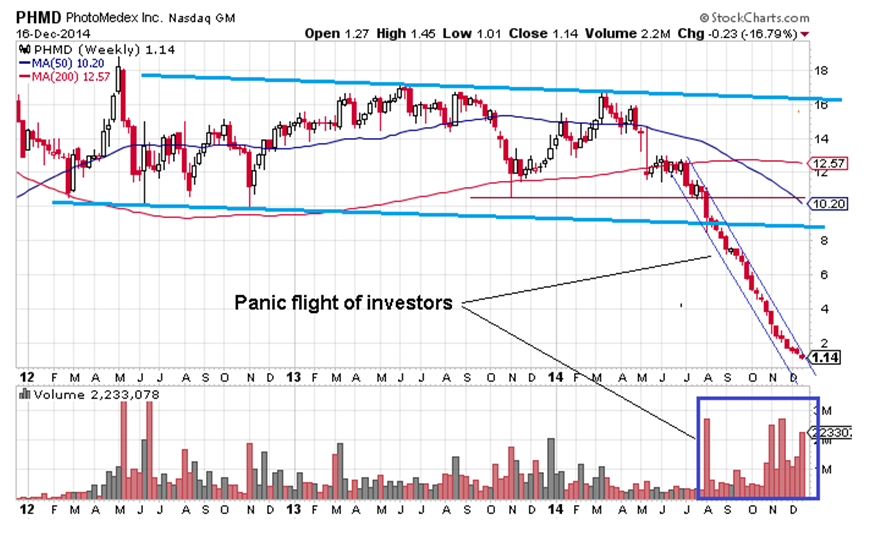 PhotoMedex Inc (NASDAQ:PHMD) consolidated in a broad range of $10-$17 for more than 2 years in the period of 2012-14 before the range was finally broken to result in a vertical non-stop drop yet to find a bottom. The area of $17-18 turned out to be a very strong supply zone. The technicians would be more interested in such a perfectly channeled downmove for such a long period of time, clearly visible on the weekly charts. Only a break above the upper boundary would signal a pause.

Barry is a senior journalist at Us Markets Daily. He reports, shoots and edits many of his own stories by himself.