Teekay Tankers Ltd. (NYSE:TNK) reported strong 3Q14 results with 90% increase in Cash Available for Distribution to $0.19 per share. Adjusted net income attributable to the Company’s shareholders increased to $2.6 million in 3Q14 from net loss of $(4) million reported for the same prior year period. The company attributed strong 3Q14 growth to an increase in its fleet size, higher spot tanker rates and higher equity income earned through commercial and technical management fees.

Have analyst identified a strong buy signal for TNK?

Teekay Tankers engages in the marine transportation of crude oil and refined petroleum products through its diversified fleet of crude oil and product tankers. The company directly owns a fleet of 27 double-hull vessels. The company owns a minority interest in Tanker Investments Ltd. and a 50% joint venture interest in an entity that manages its vessels commercially and technically. The company secured time charter-in contracts for two additional Aframax tankers subsequent to 3Q14. These increased its total in-chartered fleet to ten vessels.

Teekay Tankers Ltd. (NYSE:TNK) has continued to strategically improve its spot tanker exposure through new contracts at favorable rates. The company is well-positioned to benefit from tanker market recovery with a low cash break-even rate and strong operating leverage.

The particular strength is seen with improved stockpiling of crude oil in China, where the government is filling its Strategic Petroleum Reserve. The tanker market outlook remains positive despite the forecasts of shrinking global oil demand. Reduction in mid-size crude tanker fleet and continued increase in tanker ton-mile demand are expected to drive growth through 2015. 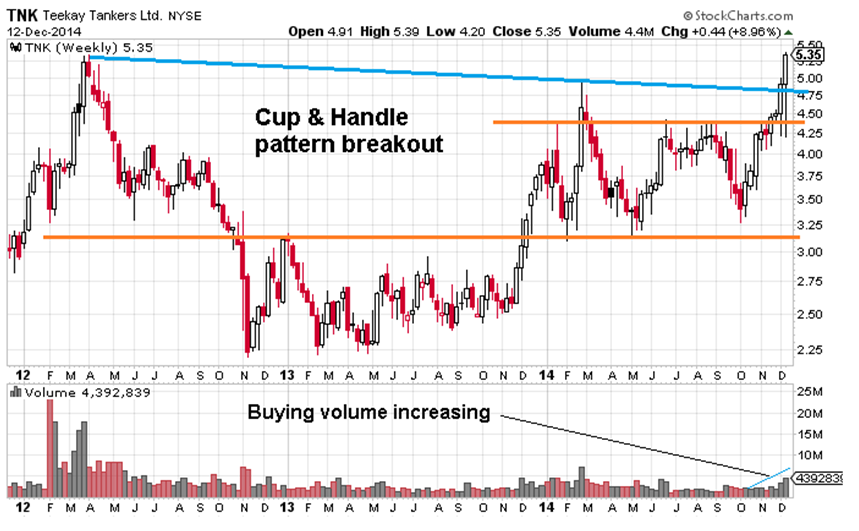 Teekay Tankers Ltd. (NYSE:TNK) has been in a long base building process for nearly 3 years now. The year 2012 saw the last phase of the huge bear market as it hit the lifetime low at $2.38, followed by a multi-month sideways consolidation in the year 2013. The first rally came in early 2014, topping out at $5.08, followed by the second phase of consolidation. This entire price action of the 3 years created a big Cup & Handle pattern with bullish implications. The breakout has taken place and the initial target of $6.50 may be achieved soon.