SanDisk Corporation (NASDAQ:SNDK), a flash memory chip maker, had a dramatic crash yesterday as it ended the session with a loss of 18.45% and registered a new 52-week low at $65.45. Naturally the selloff generated a huge spike in the volume, which at 32 million was not only much higher than the average of 5 million but the highest in the last 1 year too. The reason for this violent price action was an earnings warning by the company as it projected revenues to come in the tune of $1.3 billion, much less than the earlier forecast of $1.40-45 billion or the market expectation of $1.44 billion. A very similar earnings warning had resulted in a severe 20% cut in a single session earlier this year.

What does the Relative Strength Indicator (RSI) say about future trends with SNDK?

Obviously, a flurry of rating adjustments materialized with both BTIG and Bank of America lowering the rating to “neutral” and Evercore ISI downgrading it to “hold”. Only Goldman Sachs has upgraded the stock to “conviction buy” from the earlier “buy” while Morgan Stanley keeps the stance unchanged in overweight. 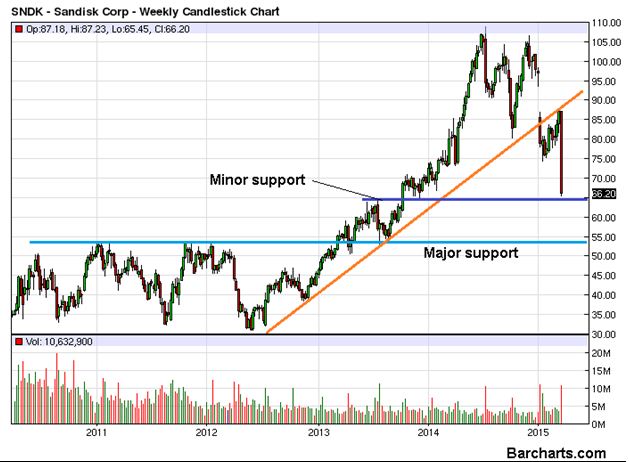 SanDisk Corporation (NASDAQ:SNDK) registered its 52 week high in July 2014 and after another failed attempt to make a higher high in last December, cracked very sharply. The stock has made a habit of dropping with large sudden gaps, scary enough for any investor. The chart clearly shows the last gradual and labored rally being nothing more than a retest of the broken long term trendline support. The area around $66 may show some minor buyers but depending on that without some serious reactive buyers, would be highly risky. The really strong support area comes much lower, in the band of $50-$55. If the correction drags the stock down to those levels, the investors can follow the Morgan Stanley recommendation and accumulate some shares there.