China Natural Resources Inc (NASDAQ:CHNR): What About The Slowdown In China?

Swift Energy Company (NYSE:SFY) operates in an industry that makes it vulnerable to challenges of falling oil prices. The problem of declining oil prices is also heightened by the soft demand and overcapacity in the industry. The price of oil has dropped nearly 40% since June this year.

How are market trends affecting SFY?  Find out here!

On December 10, Reuters highlighted how U.S. oil companies are grappling with the fallout in the oil market where prices continue to decline. Oil companies have lined up big capital spending cuts for 2015 to preserve money amid market adversity. Swift Energy Company (NYSE:SFY) is in compliance with the widespread spending cuts. The company revealed plans to spend between $240 and $260 million next year on capital projects. The midpoint of that guidance falls short of last year’s spending by 36%.

The uncertainty over oil prices and concerns that OPEC is not cutting production mean that Swift Energy Company (NYSE:SFY) and its U.S. peers will likely remain under pressure for quite some time.

Away from oil price fallout, Swift Energy Company (NYSE:SFY) is also under investigation by several securities law firms over potential claims by shareholders. The investigations are motivated by certain statements by the company regarding its previous financial statements. The company announced that some of its financial statements dating back to 2013 will be restated because of certain hitches that were discovered.

The announcement about plans to restate balance sheets hurt the stock leading to unprecedented losses for certain shareholders. The firms investigating the company are acting on behalf of shareholders that may want to take on Swift Energy Company (NYSE:SFY) over the unfortunate accounting developments.

Swift Energy Company (NYSE:SFY) surpassed both earnings are revenue expectations in the most recent quarter. The company earned $0.06 per share at a time when analysts expected that it would post a loss of $0.05 per share. It generated $139 million in revenue in the latest quarter. Analysts were looking for $133.64 million for the quarter. However, revenue in the latest quarter decline nearly 9% from the same quarter a year ago and also fell short of nearly $156 million in the previous quarter.

Swift Energy Company (NYSE:SFY) disclosed cash and equivalents of $9.04 million at the end of the latest quarter, which was an improvement from $0.56 million in the prior quarter. 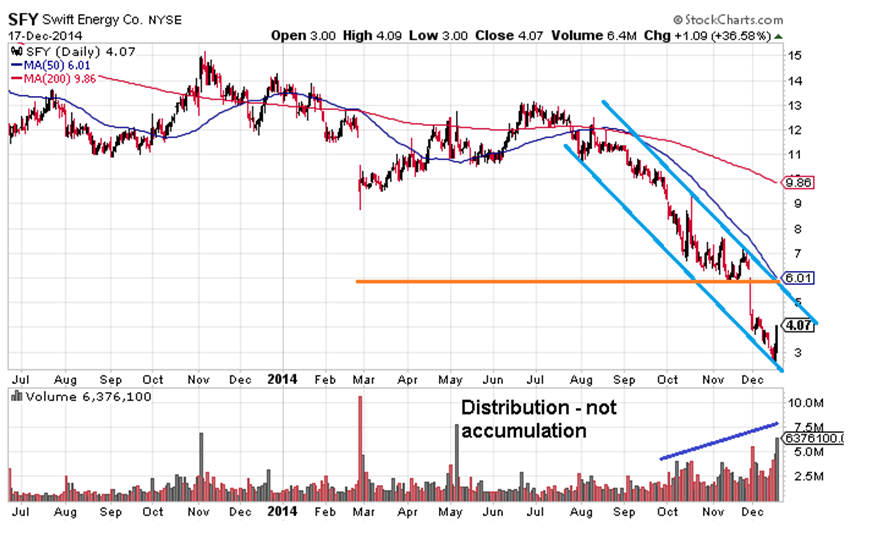 Swift Energy Company (NYSE:SFY) never managed to register even a single higher high on the weekly charts in the last 3 years though the downward speed varied in different periods. The decline took a much milder angle since early 2013 and continued near horizontal move till August 2014, when the low intensity phase came to an end. The fall from the August top of $12.49 is nicely contained in a channel, which remains unbroken in spite of the 36% rally yesterday. Expect strong supply from the $6-$7 zone.