Tesla Motors Inc (NASDAQ:TSLA)’s shares moved up by over 2.50% in the last trading session, and the reason for the rally was the company’s Chinese plans. In an interview with the Wall Street Journal, Tesla’s business development chief, Diarmuid O’Connell revealed the company’s plans for expansion in China. It is said that Tesla will launch Model X and dual-motor version of Model S in China in the coming months.

Tesla Motors Inc (NASDAQ:TSLA)’s decision to ramp up operations in China come despite weak sales in the region. A run through on the registered license-plate in China indicates that the car sales have actually dropped in the region, as per JL Warren Capital research. The company has strongly signaled to optimize sales operations and process in the region so as to tap the hidden potential in the world’s largest market.

In beginning January, Tesla Motors Inc (NASDAQ:TSLA)’s CEO Elon Musk had pointed at the problem of car-charging in China. He added that the company has appointed Tom Zhu, charging expert, to help address such problems. Meanwhile, O’Connell further revealed that major urban areas such as Guangzhou, Shanghai, Beijing, and Shenzhen will be the focus for the company’s drive to expand sales. Tesla already has a prominent presence in such areas and thus, the planned focus to help augment car sales in these areas, as per O’Connell.

There have been differing views in what Junheng Li, Research Head at JL Warren Capital and O’Connell think of Tesla Cars. Li said that Model S cars are considered as a status symbol, fashion item and cool in China, where cool means short-lived. O’Connell said that Tesla cars are not mere fashion items while its growth in the region is durable and constant. Some of the other market players reason that Tesla’s fading demand is due to its car being ahead of time. “It’s a car for the future,” WSJ cited Jerry Zhao, a sales manager at imported car seller in Shanghai. 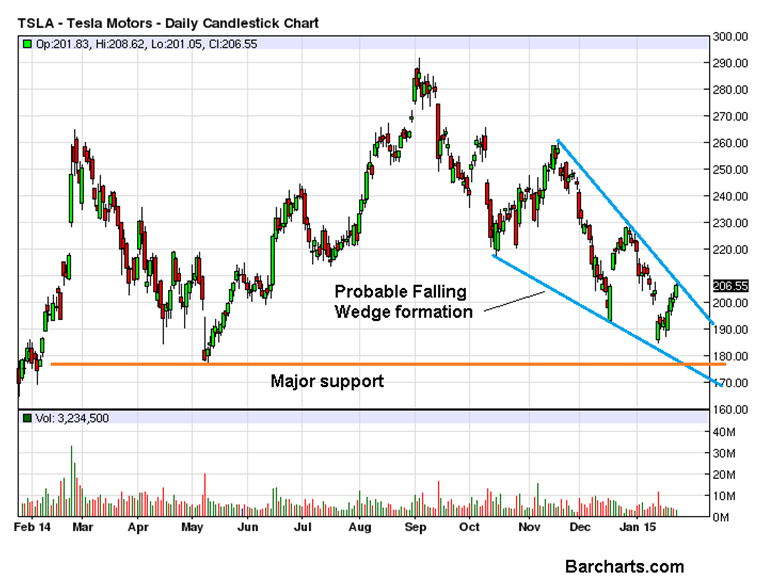 Tesla Motors Inc (NASDAQ:TSLA) didn’t enjoy a good year in 2014 as two corrections took all the gains away. The latest correction has taken the form of a Falling Wedge, suggesting bearish exhaustion and producing two bullish possibilities. Either the correction has already ended at the current month low and a rally to $260 levels has begun or another small downmove is going to make the final bottom around $180 levels. Bears should be cautious as any rally above $220 can be very sharp.