The Coca-Cola Co (NYSE:KO) has been struggling since last October as the stock attempted at least 4 times to rally but faced very strong rejection from the higher levels. It has effectively been rangebound in $39-$45 but now it seems that the lower levels can’t be ruled out. The problems of the company are evident from the struggle to boost the revenues in a world that is gradually shifting to healthier options from the classic soda. In response, the CEO Muhtar Kent declined his 2014 bonus, amounting to $2.5 million. It has been taken as a positive step by the management of the company despite some pointing to the increase of 23% in the compensation of the CEO, coming at $25 million.

Learn what the indicators are telling the analyst about KO.

The Coca-Cola Co (NYSE:KO) has been trying many things to fight the decline in sales. Not only diversification into tea and energy drinks, it plans to cut 1600-1800 jobs within a year with a target of saving $3 billion by 2019. It had already increased its marketing budget to $1 billion from the earlier $800 million and claimed to have increased the price of its products based on that. 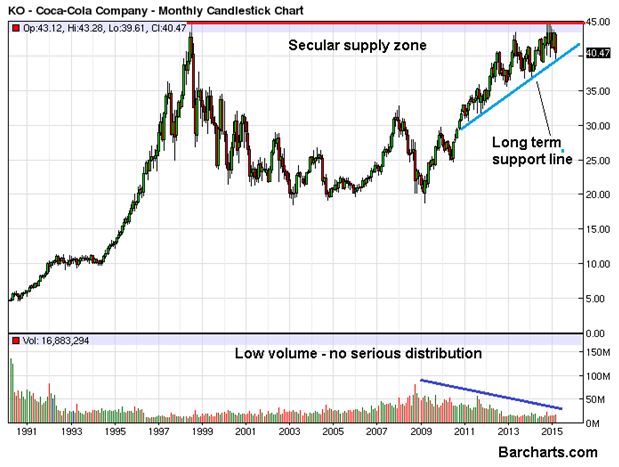 The technical state of the stock is at a precarious level right now. The chart attached clearly shows why the stock is facing so strong a selling pressure around $44-$45, as that was the band where the stock had made its top in 1998. That is a historical supply area and may keep the price down for the next few months at least. Any breakout above $45, without creating a strong base in the form of a sideways range, would be suspect and prone to false breakout trapping a lot of bulls. The immediate strength of the trend depends on the ability of the stock to sustain above $40.