The management of Vapor Group Inc (OTCMKTS:VPOR) has spoken about a plan for the company’s outstanding debt. There are efforts to clear the outstanding debt by 2Q2015. The target is the elimination of the long-term debt.

Read what this analyst has to say about VPOR.

Vapor Group Inc (OTCMKTS:VPOR) is already among the promising pennystocks, especially by looking at its latest financial statement. Additional effort to eliminate debt should put the company among the most pricing pennystocks out there.

In a recent press release, the CEO of Vapor Group Inc (OTCMKTS:VPOR) said hope to eliminate their long-term debt by the start of 2Q. The move is not only expected to strengthen the company’s balance sheet, but also mark the end of toxic dilution in the company.

Vapor Group Inc (OTCMKTS:VPOR) had $3.58 million in total debt at the end of September 2014. Debt increased from $2.87 million in the prior quarter. Stock dilution has been a matter of serious concern in the company. In a period of just about five months, the company’s outstanding shares jumped almost four times to 1.1 billion shares.

In the most recent financial statement, Vapor Group Inc (OTCMKTS:VPOR) disclosed $859,000 in cash, $1.3 million in revenue and $184,000 in net loss. The company also revealed total current assets of $3.5 million and $4.1 million in total current liabilities. 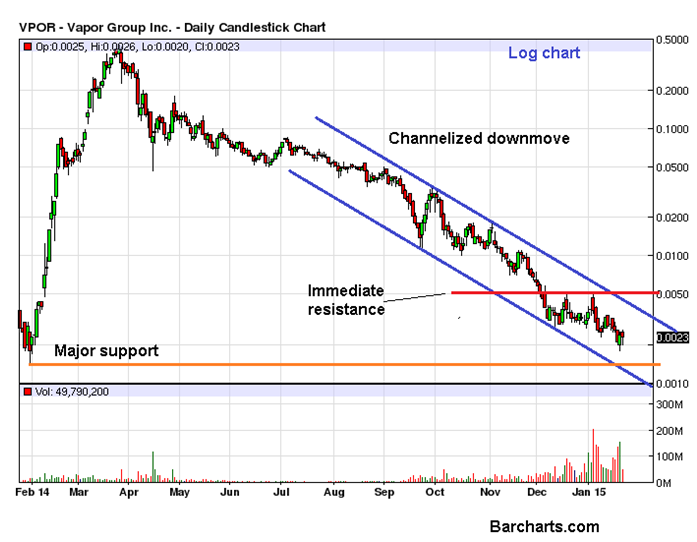 Using a log chart instead of a normal arithmetic chart always signifies a dramatic change in values and that is exactly the case with Vapor Group Inc (OTCMKTS:VPOR). From the heights of $0.50, in less than 12 months it has come down to the levels of $0.0020 and the price actions are yet to show any bearish exhaustion, let alone a bottom. The perfectly channelized downmove implies total domination of the bears and that may continue in the coming months too.