Walter Energy, Inc. (NYSE:WLT) is going to lay off 46 mining jobs in Brookwood, bringing the total number of employees to 1016, in another step to survive from a possible bankruptcy. According to the company, whenever the positions get open again, the laid off workers would be eligible to apply again.

The entire coal industry in the US has been going through a downward spiral in the last few months and without a bounce in the coal price arriving soon, all the companies in the sector will continue to face greater difficulties. This worst time for Walter Energy, Inc. (NYSE:WLT) is clear from the result of the company as the net loss in 2014 came in $470.6 million against a net loss of $359 million in 2013. One must also consider that the decline in coal price has resulted in decreased production in 5b coal mines owned by the company. 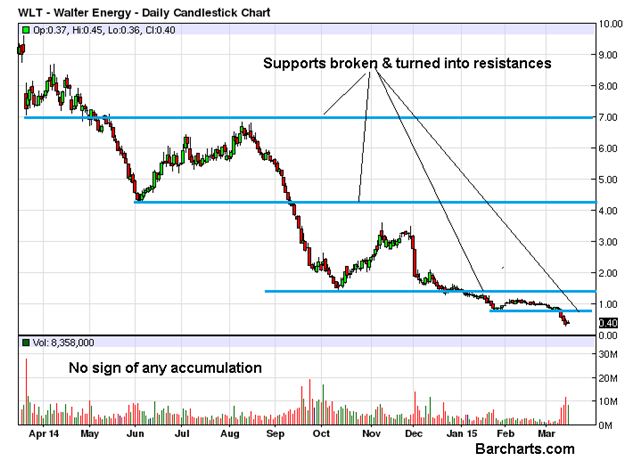 The recent steps by Walter Energy, Inc. (NYSE:WLT) for a turnaround includes a debt for equity swap, taking out $66.7 million in 2021 notes. According to some analysts in the market, this step alone may not be sufficient. The difficulty of the company also increases from the notification sent by NYSE regarding its listing requirement non-compliance. If the stock price stays below $1 till 2015 September, the stock may be delisted.

All these issues clearly show that the company is running a high risk of bankruptcy due to huge interest payments and the low price of coal, the non-compliance with NYSE being just a symptom of the sickness.

The technical picture doesn’t provide even the smallest reason for any positive sentiment about the stock. All the charts show are the supports breaking and more and more people fleeing off. Investors would do better to stay away from the stock.

< Previous ArticleCTI BioPharma Corp (NASDAQ:CTIC) – A retest of $1 can’t be ruled out
Next Article > DryShips Inc. (NASDAQ:DRYS) – Any upside limited to $1.50 levels
About the Author
John Eisler